“I had the pleasure of knowing and working with Jeff for many years and was proud to have recruited him to ARAWC as its first Chief Policy Officer. His deep knowledge and expertise in the area of employee injury was a great match to ARAWC’s need for a credible spokesperson for its mission and strategy. His charisma, personal charm, and camera-friendly presentation made him a great addition to our leadership team. Being a man of great integrity and personal wit, made him all the more likable and a trusted advisor to the Association. I’ll miss him greatly.”
-Chris Mandel, ARAWC Treasurer and Executive Council 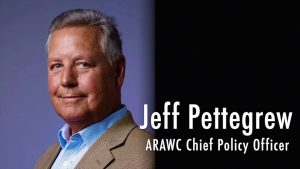 Jeff Pettegrew, long-time senior risk leader and thought-leading contributor to the industry has passed away in Southern California. He leaves behind his wife Val, a daughter and two grandchildren.

In his most recent life, Jeff Pettegrew was first a husband to his lovely wife Val, a doting father and grandfather, a strong Christian and then some. In his last business roles, he was Chief Policy Officer for the Association for Responsible Alternatives to Worker’s Compensation and just prior to that, the Chief Imagination Officer at Insurance Thought Leadership. In his earlier lives, Jeff was the first executive director/CEO of the California Self Insured Security Fund (SISF), beginning in January, 2004. He was named “Risk Manager of the Year” in 1989 by Business Insurance magazine and was the chairman of the Business Insurance National Workers Compensation Conference for nine years.

Before SISF, Jeff was vice president of risk management and insurance for Westaff, a self-insured international staffing company. Prior to that, Jeff was CEO (1980-91) of the Contra Costa Municipal Risk Management Insurance Authority, where he pioneered one of the nation’s first fully self-insured and self-administered joint powers authorities — providing workers’ compensation, liability, property, safety and health coverage to 18 Bay Area municipalities. A former assistant city manager of Walnut Creek, Jeff began his risk management career as the first risk manager for the cities of Walnut Creek (1977-79) and Sunnyvale, CA (1979-80).

Jeff was the chairman of the Business Insurance National Workers Compensation Conference for nine years. He also served as president of the Public Agency Risk Managers Association (PARMA); the California Joint Powers Association (CAJPA); and the Golden Gate chapter of the Risk and Insurance Management Society (RIMS). He has held committee roles with national RIMS.

During the past 30 years, Jeff has been a frequent lecturer and spokesman at various regional and national conferences around the country and has appeared on CNN and “60 Minutes” regarding complex self-insurance and financial risk management issues. He has taught doctoral-level classes in insurance at Golden Gate University as well as ARM courses. Jeff meets regularly with California and other state lawmakers and regulators on a variety of issues and has served as a consultant and an expert witness. In 2011, Workers Compensation Executive designated Jeff as one of the “Most Influential People in the Workers’ Compensation Industry.”

A former captain (administration/protocol officer) in the U.S. Air Force, Jeff arranged VIP meeting and travel arrangements for dignitaries; general officers; the White House (including President Nixon and Secretary of State Rogers; Congress; and the Pentagon while stationed in California and Iceland.

He earned a masters degree in public administration from California State University, Hayward; a bachelor of arts degree in communication from Denison University; and an associate in risk management (ARM) designation from The Institutes.

You can express your sentiment to his wife Val at this address: